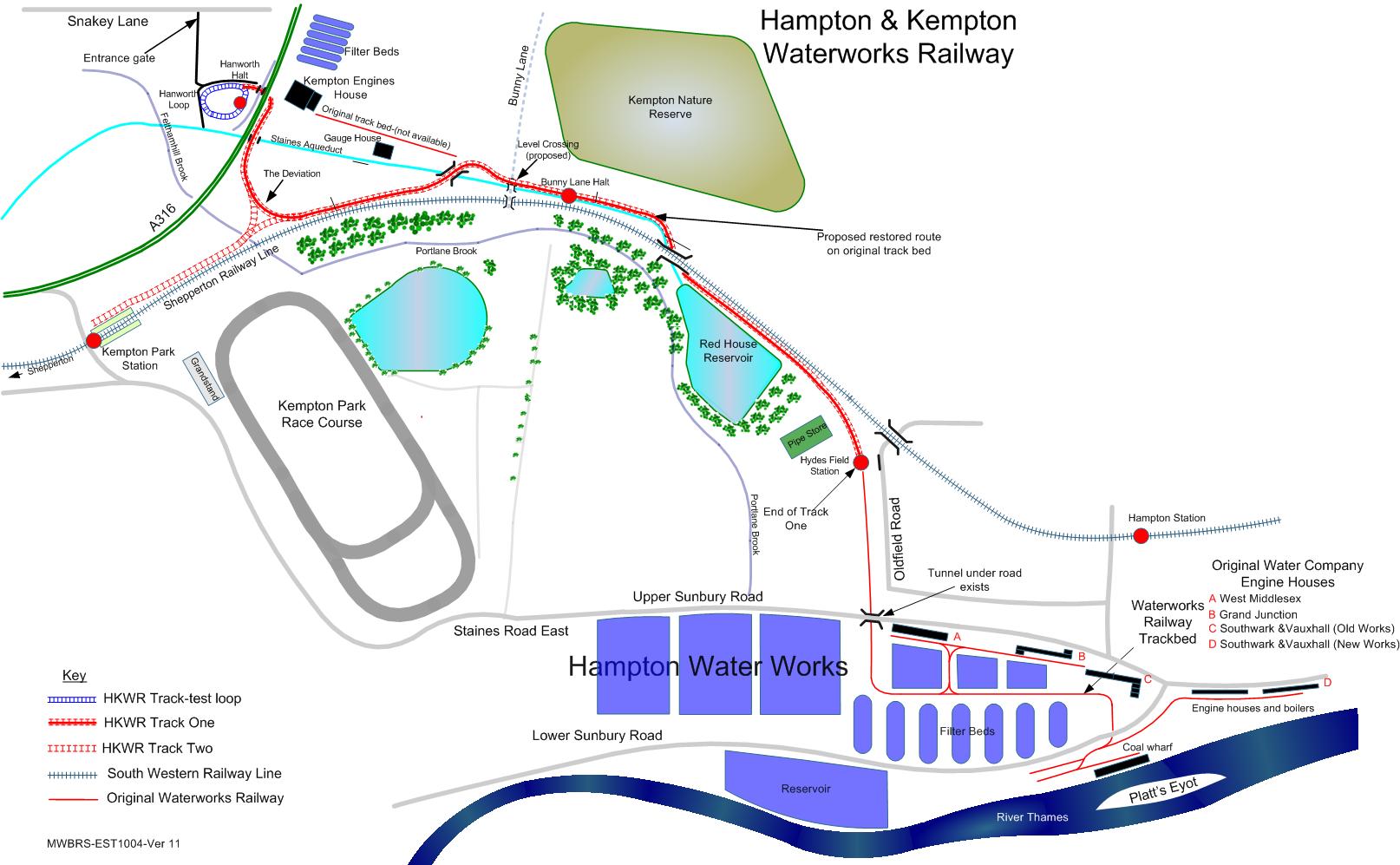 Plans are in place to further extend and reinstate the railway to give visitors a more enhanced and interesting steam passenger journey through open country and woodlands, and pass by a reservoir which is a bird sanctuary and Site of Special Scientific Interest. We also plan to provide a Visitor and Education Centre.

The strategy we are following is to re-instate as much of the original track between Kempton Steam Museum and Hampton as possible. As the original track passes through a Thames Water secure site, we will start our extension from our present track- ‘The Hanworth Loop’ – with ‘The Deviation’ that leaves Kempton, crosses the Staines Aqueduct and travels across open land known as the South Field. This is an undeveloped stretch of land owned by Thames Water (leased by us) and will provide a unique ride through open countryside and woodland. After curving though the South Field, the track will re-cross the Staines Aqueduct and re-join the original track bed near Bunny Lane in Hampton. There will be a station at Bunny Lane. Passengers who are members of the Thames Water Friends Scheme would be able to walk to the Kempton Nature Reserve nearby.

The track then runs close to the Aqueduct until they both pass under a pre-existing bridge under the South Western Railway line. The track then immediately runs beside a beautiful reservoir known as the Red House reservoir named after the red brick pumping station that is situated in its southern corner.

Soon after the Red House reservoir the track passes beside a service road until it arrives at the site of the terminus of the railway at Hydes Field, Hampton. This will be an extensive station with a turntable and a run round loop, together with a water tower.

The total length of the track from Kempton to Hydes Field will be 2.3 miles.

The coach shed is a vital enabling piece of infrastructure to support the main project. At the moment we only have limited storage for our rolling stock and we will be running much longer trains when we extend the track to Bunny Lane and Hyde’s Field.

Bridges to be built

1. Aspiration to build a link to Kempton Park Station.

The South Western Railway has a station at Kempton Park Racecourse. The SWT track crosses Felthamhill Brook on a bridge that has spare capacity so this space could be re used for our line. The station platform was built with space for an extra track on its north side. Network Rail have  been approached and do not have any plans for that space so with the necessary permissions a link with a mainline station would be possible.

The aqueduct was built c1902 to feed the Staines Reservoirs which were constructed across the parish boundary in Stanwell a year earlier. It takes water from the River Thames at Hythe End, just above Bell Weir Lock. In later years it was used to feed the Hampton Water Works reservoirs at Kempton Park, plus the King George VI Reservoir built next to the Staines Reservoirs, between Staines and Stanwell and opened in 1947. The aqueduct runs through Thames Water land to the Red House reservoir ( a bird sanctuary) where it terminates. The Red House reservoir feeds the Hampton Water Treatment works.