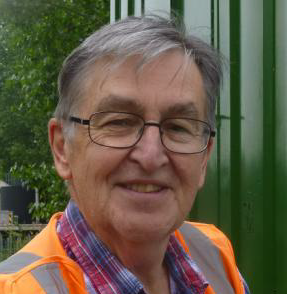 “Our railway society’s history is a great one and it’s only through the sheer determination of the society members that we have got this far”. Colin Clode, Chairman, Metropolitan Water Board Railway Society (MWBRS)

The industrial narrow gauge railway, built in 1915 was used to carry coal from barges at Hampton Wharf to the pumping stations at Hampton and Kempton Water Treatment Works that provided clean drinking water for London. The railway was dismantled in 1945 and faded from memory but in 2003 the Metropolitan Water Board Railway Society (MWBRS) was formed with a view to change all that.

The MWBRS was set up with the objective of restoring as much of the original Waterboard Railway line as possible.  In order to manage the operation, restoration, and fund raising of the railway a company named Hampton and Kempton Waterworks Railway Ltd (HKWR) was set up in 2013 to construct the Hanworth Loop as an attraction for the general public. See map.

Today the railway is operated entirely by the MWBRS volunteers, and is open every Sunday from March to November, offering special events throughout the year. Construction still continues, and work has started to extend and re-instate the original track down to Hampton, in South West London. But it doesn’t stop there.

Plans are now in place for the MWBRS  to further extend the railway and give visitors a more interesting steam passenger journey through previously unavailable woodlands including a Site of Special Scientific Interest.

There’s also plans to provide a visitor and education centre and the society is embarking on a  fundraising campaign to raise £1.8 million to complete the restoration.