From Gasworks to Waterworks 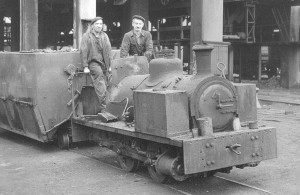 Darent is now the main motive power on the Hanworth Loop for our passenger trains. Handsome is as handsome does. Darent’s appearance has changed a lot since her build by Andrew Barclay, Kilmarnock, Works #984, delivered to the Provan Gasworks in Glasgow in November 1903; there she was No.3, one of a batch of six identical locos. Below is a picture of No.4 of the batch (AB#985) judging by the number on her smoke-box door.

With no cab, short chimney and low-slung boiler and very small wing-tanks and the track gauge at Provan was 2’ 6”. Later locomotives had rather larger wing tanks, but were otherwise to the same design, such as Dougal now running on the Welshpool & Llanfair Light Railway.

The Scottish Gas Board closed the Provan Gasworks site in 1959, and in 1961 they sold AB#984 for scrap to Abercrombie & Co. However she survived the breakers torch and was sold on the R P Morris in May 1963. AB#984 was stored in a series of different locations. It does not seem to have been put to any use until placed on a plinth outside Gloddfa Ganol in Blaenau Ffestiniog as an advertisement for the Narrow Gauge Enterprises at that site. 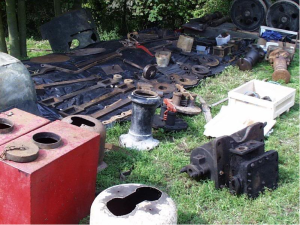 All of the removable and valuable parts seem to be been removed, but it does seem to have acquired a longer chimney – perhaps to enhance the appearance as a “railway locomotive”. That it was not used more ‘actively’ could be because its 2’6” gauge was at odds with the Ffestiniog-home-of-the-two-foot gauge!

When Gloddfa Ganol was to be re-opened as a slate quarry AB#984 was put up for sale and was transferred to FMB Engineering for re-gauging from 2’ 6” to 2’. It was later purchased by the “Provan Group” from the Eynsford Light Railway, a private railway in Kent, as a “kit-of-parts” as you can see laid out in the picture. Note two things in particular – the chimney is back to a short one and the wing tanks have been painted red. 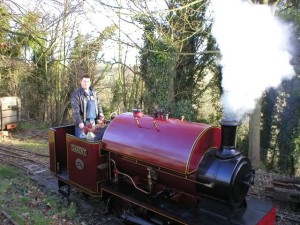 The Provan Group transported Darent as a guest engine to several other 2’ gauge railways including the Bredgar & Wormshill Light Railway and the Lynton & Barnstable Railway.

In 2009 the Provan Group added a cab and a taller chimney and added the number ‘3’ that it is believed that she carried in the Provan Gasworks, so that she looked very much as she does today.  Again Darent visited several railways including the Bredgar & Wormshill Light Railway and the Amberley Museum & Heritage Centre Railway.

In 2011 Darent was put up for sale by the by-now sadly diminished Provan Group. Thomas Wicksteed with us on borrowed time and about to return to Kew, so Rick & Jerry Scholefield decided that a Steam Locomotive was just what Rick (and the Metropolitan Water Board Railway Society) wanted!
Darent arrived in late August 2013, almost 110 years old. Her arrival was certain unconventional, perhaps undignified, but certainly very efficient. She is now running the Sunday trains around the Hanworth Loop as you saw in the first picture – and yes, that is a Young Lady on the Footplate!

Darent came from Gasworks in Glasgow via the Quarries of North Wales and the Garden of Kent, named after a tributary of the Thames, to arrive in the leafy fields of West Middlesex on land owned by Thames Water! 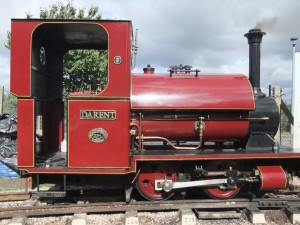